Hey, this is my first post here and I've honestly got very little idea what I'm doing ahaha, basically I need help.

I recently built my first PC with the following specs:

I also have a Empire Gaming Warfare case, using the base fan (2 input 1 output) and the wraith prism cooler that came with the CPU.

My issue is as follows: I downloaded Call of Duty Warzone, and after a huge issue linking my PS4 account to my battle eye one, I was ready to play. So I launched my game and boosted my settings to high, I was enjoying learning about the fluidity of mouse and keyboard and the new gameplay aspects of PC when suddenly - BLACK. The PC restarted and I was presented with a crash log from my GPU where, from my very basic knowledge, I understand that it's a VRAM issue. Basically it states in video memory info that my budget is 6275MB but I used 7442 MB and so I had a deficit of 1167MB. 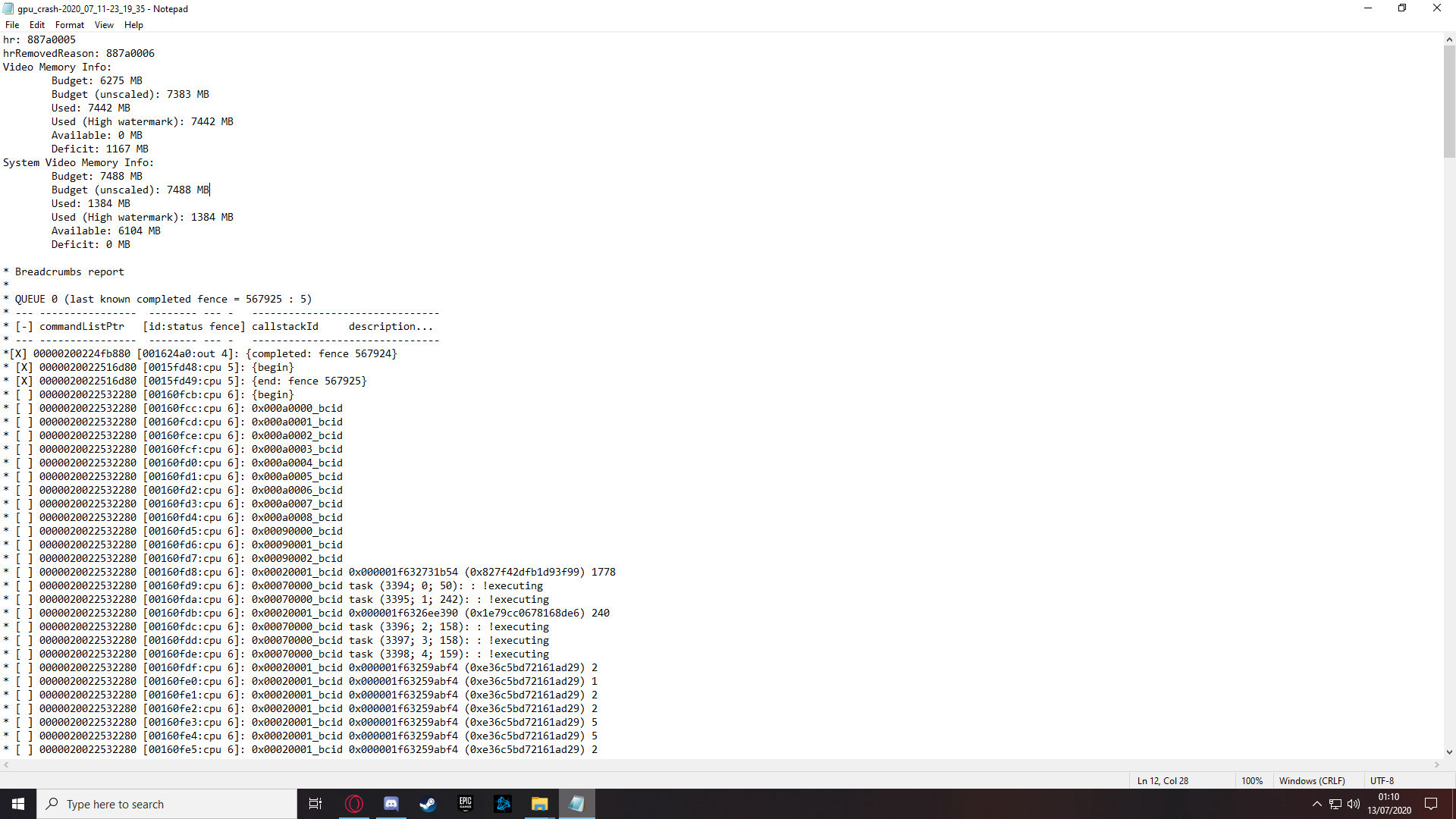 So basically, I changed the settings to mid settings and still got over 6000mbs on the AMD Radeon software metrics overlay while playing the game. After changing the Software settings to custom and changing a few things on I saw on some forum websites, I can now run Warzone on basically high settings at 100 resolution (1080p) BUT it still reaches over 7000MBs of VRAM Util which scares me as it recently reached the amount listed in the crash report, albeit with no crash, and also limits my ability later to use screen capturing software like OBS as I wish to do YouTube videos. The temperatures are pretty high too, but not alarmingly high just yet, at max 81C GPU Temp. and max 92C Junction Temp. This is the base clock as well, not over/underclocked, and the frame rate limit is set at 144FPS as to not overwork the card (144Hz monitor).

Finally, I just want to say that my friend has a cheaper Nvidea card that has 6GB of VRAM that runs the game on high at 4400MBs VRAM max. Is this an AMD driver/software issue? How can I optimise this? Is there any more info you guys need?

I appreciate any help you guys can give me.

No need to bump threads..

No need to bump threads..

Have you installed the latest video and chipset drivers for your video card and motherboard from AMD's website? What build number of Windows 10 are you using? Are you overclocking any components in your motherboards BIOS? Try setting the Windows power plan to high performance in the Control Panel and see if that helps as well.
S

Have you installed the latest video and chipset drivers for your video card and motherboard from AMD's website? What build number of Windows 10 are you using? Are you overclocking any components in your motherboards BIOS? Try setting the Windows power plan to high performance in the Control Panel and see if that helps as well.
Click to expand...

Hi
Yes I have the latest drivers installed for both the mobo and the graphics card. I'm on Windows 10 Pro 64x. I am not overclocking any of my components, nor am I running them below what they're base limit is. I have just switched the Windows power plan to high performance as it couldn't do any harm to give it a try haha,
I appreciate your help, and any help anyone else is willing to provide. I'll keep you up to date on whether or not the performance is better.

Make sure you are running on Windows 10 version 2004 if you aren't already.
S

Evan Omo said:
Make sure you are running on Windows 10 version 2004 if you aren't already.
Click to expand...

Hey I've tried everything you've listed and I'm still using over 7GB of VRAM in game and it's at NORMAL settings. I got like 7148MB out of 8GB. It began stuttering and displayed the packet loss error but didn't report any packet loss % which makes me believe it is GPU stuttering. Is 8GB of Vram not enough? It's infuriating.

Does this VRAM issue happen with other games at 1080p resolution? A video card with 8 GB's of VRAM should be plenty especially for 1080p quality.

Try performing a clean boot in Windows and see if there is any improvement.

Thread is closed due to lack of response.