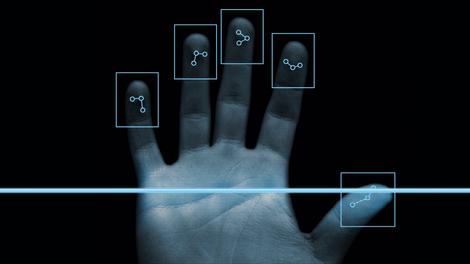 
As smartphone owners begin to store more sensitive data on their devices, manufacturers are exploring new ways to keep information safe. Though not the first to market, Apple's debut of Touch ID on the iPhone 5s shows us that security could be simple to use.

With new uses for mobile devices, security will be an important component to not only securing data, but also to reducing fraud. With mobile phones aiming to replace credit cards with payment systems like Apple Pay, Android Pay, and Samsung Pay, biometric security will make it easier to pay for goods while keeping your financial information safe through the transaction process.

With Qualcomm's tech, it doesn't matter how you position your finger on your phone, and the technology could sense your prints through the glass display, metal chassis, or plastic body of your mobile device. Manufacturers no longer need a dedicated place on a phone or tablet to place a fingerprint reader, a move that could lead to even more compact devices.

The ultrasonic waves inside the Snapdragon Sense ID will be able to detect a user's fingerprint even if the user's fingers are covered in sweat, lotion, or condensation - all advantages over Apple's class-leading Touch ID.

YouTube : https://www.youtube.com/watch?v=FtKKZyYbZtw
Current fingerprint technology uses capacitive sensors to create a finger scan, but Qualcomm's sound wave technology could map out the ridges on a finger even in the presence of contaminants.

Smartphone manufacturers are already testing Sense ID, and Qualcomm expects devices with the new ultrasonic fingerprint reader to be available in the second half of the year.


Best known for its trackpad technology on laptops and smartphone displays, Synaptics is making a push into mobile security with the latest product in its Natural ID family. The VSF6170 Slim Slide Fingerprint Sensor allows smartphone manufacturers to integrate a slim fingerprint scanner onto the side of a phone or tablet.

The space-saving sensor could be incorporated into small structures such as the power button, volume rocker, or on the phone's side frame. Synaptics claims that the ultra-slim design comes in at just 2.8mm thin.

Because of the thin design, Synaptics' solution requires users to swipe their fingers, instead of just pressing their fingers onto the sensor like on the iPhone 6's Touch ID or the Galaxy S6's new fingerprint reader.

Additionally, Synaptics claims that embedding a fingerprint scanner into the side of a phone allows for easier one-handed unlocking. With the same hand, you can now hold the phone and swipe your finger to unlock your phone.

The sensor is being tested by smartphone manufacturers now, and Synaptics plans to start mass producing the new sensor late this year.


Rather than placing a fingerprint sensor underneath glass, IDEX introduced a solution that would embed a sensor into glass. The company claims that this would lead to more accurate fingerprint scans, and one where the glass and scanner are part of the continuous design of a smartphone.

"Most importantly the biometric performance from our in glass sensor is vastly superior compared to sensing under the glass, suffering none of the blurring or fading caused by sensing from underneath glass," said Dr. Hemant Mardia, CEO of IDEX, in a statement.

YouTube : https://www.youtube.com/watch?v=X1dAlP5sFzw
In order to embed the IDEX sensor into the glass, IDEX says that the glass has to have a thickness of 500 to 700 microns, or 0.5 to 0.7 millimeters. Since Gorilla Glass 4, which is used on Samsung's new Galaxy S6 and Galaxy S6 Edge smartphones, has a thickness of 400 microns, IDEX's solution would not work on the front or rear cover glass of those devices.

In terms of visual appeal on buttonless devices like that on the HTC One M9 and Sony's Xperia Z3, a fingerprint scanner embedded into the glass could enhance security while preserving clean aesthetics.

On industrial slates and phones on which thicker glass would offer more protection, IDEX's in-glass biometric scanner may be a good way to keep data safe and devices rugged.

The eye is the key


Operating on the adage that the eyes are the windows to the soul, Fujitsu's iris scanning technology will allow your eye to unlock your smartphone's window. Using an infrared scanner, Fujitsu claims that its biometric authentication system only requires that a smartphone user look at the phone's display to unlock it.

There are benefits to relying on the eye, rather than a finger, to secure your sensitive data. Fujitsu says that it is more difficult to forge compared to fingerprint readers.

"The pattern of one's iris does not change much at all after the age of two," Fujitsu said in a statement of iris scanning. "It is difficult to injure its surface, and is difficult to forge." The company says that the error rate is one in 100,000.

Additionally, there are also benefits to users, particularly those in the enterprise segment. If you're working in manufacturing, health care, or in the field where gloves are required, it may be impossible to use a fingerprint to unlock a phone or tablet based on today's available technology, but with iris scanning all that is required is your gaze.

With iris scanning, Fujitsu says you can unlock your phone, and you can use the technology to enter login information on apps and websites.

Because Fujitsu relies on an infrared light and IR camera to scan the eye, the security technology can work in the dark as well.

Fujitsu says the goal is to bring iris scanners to commercial devices in fiscal 2015.

In addition to passwords, competing vendor EyeLock demonstrated at CES 2015 that iris scans could replace locks, allowing users to gain access to a building or start their car ignition with a verified eye scan.


Intel's True Key technology uses the human face as the key. True Key is similar to how the human brain makes subconscious calculations to instantly detect if a face is familiar.

Intel says True Key uses facial math to identify characteristics of the face that make each person unique. Your digital identity is created with multiple features, such as your facial features and your fingerprint on supported devices like the iPhone.

"True Key by Intel Security unlocks sites, apps and devices by using personal, attributes such as facial features, a fingerprint or devices people own," Intel said in a statement. "The biometric technology used in True Key not only removes the hassle of remembering passwords, it also allows people to customize their level of security by using multiple factors to log in - the more factors added, the stronger a True Key profile becomes."

YouTube : https://www.youtube.com/watch?v=eM6Reoyt_Ug
True Key is cross-platform compatible with Windows, Mac, iOS, Android, Chrome, and Internet Explorer, and the software can track password changes as well as generate strong passwords on the go.

The idea is very similar to password manager LastPass, but rather than having to type in your LastPass password to access your stored passwords, True Key can instantly unlock itself based on facial recognition.

It's all in the wave


Thanks to Hitachi's new finger vein sensor, going through airport security, entering a large stadium or venue, or even opening your secured office doors can be easier. With a finger vein sensor, users simply wave their hands or fingers over a scanner to gain entry.

The system requires prior registration to prevent unauthorized access into a secured location. Once registered, a user is able to confirm their identity by waving their hand over the scanner. The scanner can process about 70 users per minute, or roughly the rate that subway gates in Tokyo process commuters.

YouTube : https://www.youtube.com/watch?v=NCMM9sBUZyY
The smaller version of finger vein sensor has been available to PC users for some time now, and Hitachi's VeinID has been adopted by Barclays banks to secure logins. The large venue solution could soon allow high tech facilities to replace badges, key access cards, and PIN entry locks with biometric tech for access.

A cousin to finger vein sensor is palm vein sensor, a technology called PalmSecure that rival Fujitsu has been using on some of its enterprise laptops.

YouTube : https://www.youtube.com/watch?v=CqfbSXmLIZQ
Marching to the beat of your own heart


With wearables becoming a hot topic and health-tracking smartwatches about to take off with Apple joining the fray with the Apple Watch, heartbeat sensors could become a viable authenticator.

Companies like Bionym with its Nymi wearable could identify the wearer's unique heartbeat and allow them to unlock a phone or tablet. The premise is that the wearer would wear a wristband that records an ECG rhythm for identification.

According to Bionym, it doesn't matter if your heart is beating faster because you're nervous. A heartbeat is unique to a person, and Nymi looks at the electrocardiogram waves to identify the wearer.

YouTube : https://www.youtube.com/watch?v=jUO7Qnmc8vE
The technology is being trialed by Halifax bank in the UK currently, allowing customers to log into their bank accounts without having to type in their credentials and passwords.


At South by Southwest 2015, Yahoo announced that it wants to kill the password this year for its sites.

The internet company discovered that Yahoo users are frequently forgetting their login credentials, and to make its content both secure and seamless, Yahoo will be ditching the old password in favor of a phone-based security method.

Soon, when Yahoo users visit a Yahoo site - like Yahoo Mail, Yahoo Finance, and Flickr - they'll be able to register a mobile phone number. The next time a log-on is required, Yahoo will text a four-digit code to the person's phone, and then you can log in using the PIN.

It's similar to two-factor authentication on Gmail.

With two-factor, Google requires you to login with a password. After that, the second factor makes things more secure by requiring you to validate a code that was sent to your mobile device.