I could really use some help on what to do with the situation I find myself in.

Here's whats happening:
I installed the new M.2 NVME drive on 11/23. The computer posted, and instead of booting to Windows it stopped at the BIOS. I thought this was weird but figured it wanted to confirm my boot order when I installed the new drive. I also noticed my clock had been reset. I did not remove the CMOS during the upgrade, but did disconnect the PSU.

Once I booted to Windows everything was fine, no issues for several hours that evening.

On 11/24 on first boot I had a BSOD, but I power cycled and was able to get to my desktop. Over the next few hours I received many many BSODs all with different error codes. Some indicated a memory leak, some indicated driver issues, and some indicated a corrupt NTFS.sys on my boot drive.

I ran a memory diagnostic and the results were fine, no errors detected. I updated my drivers through Nvidia, and completed Windows updates. I received several BSODs during this process all with different error codes.

I then ran SFC/SCANNOW in the terminal. It came back with the result that there were corrupted files detected and they were repaired. I have attached the .dmp files to this thread. I also attempted to flash my BIOS to the newest build from MSI.

I was unable to complete the BIOS flash. I followed the directions from MSI to the letter and was unsuccessful. When I would try to find the file to flash the BIOS it wouldn't see it in the selection menu. All drives and folders were present, but the actual .rom, .bin, or .130 file was not recognized by the BIOS and I wasn't able to flash to the latest build. I tried different USB sticks, 2.0, 3.0, 1g, and 32g. All file systems were tried, NTFS, exFAT, exFAT32. Different USB ports on the motherboard, not on the front of the case. Renamed the files to every variation of .bin, .rom, .130 I could think of. In the root directory I placed the .zip folder, an extracted folder, the actual file, anything I could think of with how to place the files on the USB sticks. I even tried flashing it to the next most recent build on the MSI site, thinking that the build I have currently is outdated and cant make the jump the latest build. Nothing worked.

I contacted MSI and they were also unable to get it to flash to the latest build. ****.

At this point, I booted into a windows recovery USB stick, and formatted my boot drive to do a completely clean install of Windows. I wasn't able to complete this as I was given an error code during the install that indicated that the sectors on the drive I had selected for installation were corrupt. During this process I also received many BSODs and had to start the process over multiple times, all errors on the BSODs were random and indicated all kinds of different problems.

I then tried to reimage the boot drive from an image I had made a few days ago. The windows boot USB stick was able to image the formatted boot drive and I made it to my desktop. At this point I tried to update drivers, windows updates, Nvidia drivers and ran another SFC/SCANNOW in the terminal. All proceeded fine. Everything worked fine for about an hour and then I started getting BSODs with all the same random error codes again.

At this point I removed the NVME drive I had installed so the only disks in the machine were the two original drives. It posted and booted windows from the image I had put on the original boot drive. Once on my desktop I received more BSODs all with random errors.

At this point I tried to use a Linux bootable ISO of Linux Mint to format both drives completely, and remove all partitions. I used the Linux ISO to do this to avoid any conflicts that Windows might give me with reformatting and wiping the MBR partitions. I did not install Linux, I only used the ISO off the stick to run the OS to complete the format.

After I did this in Linux I tried to reinstall Windows cleanly through the Windows bootable USB, and was met with the same error code during the install of corrupt sectors on the drive. During this process I was receiving BSODs when there was nothing present on either drive after the format in Linux, indicating to me a hardware issue. The BSOD codes I was receiving during this attempt at an install were all driver related "WHEA_UNCORRECTABLE_ERROR". I took the USB Windows boot stick and formatted it, overwrote it, and recreated it into a Windows 10 bootable USB stick on my laptop. Same BSOD errors occurred after this as well.

At this point I believe the motherboard is fried. Based off of the initial boot after installing the new drive where it POSTed and went to the BIOS with a reset clock. I never touched the CMOS, and the new drive wasn't even initialized or formatted in Windows, so I don't know why it would go to the BIOS unless there was some issue with the motherboard. MSI customer support also wasn't able to get the BIOS flashed to the latest build either.

Does anyone know if there are memory diagnostic tools that I can run in the terminal on Linux? I tried to run a memory diagnostic from the Windows USB boot stick after formatting the two original drives through the terminal, but it wouldn't run. I'm guessing that's because there is no install of Windows present to display the results in.

I don't know much about computers, so I feel like perhaps there is something I am missing that I could try. Any ideas or advice would be extremely appreciated.

Thanks so much for the read,
-talex

Hello @talex490 and welcome to PCHF

It sounds like the motherboard is a dud. It doesn't happen very often but it does.

That specific stop error means a hardware fault, and from what you've explained, it's pointing to the motherboard itself.
•••

Thanks for validating my diagnosis. Appreciate you reading through my book.
Reactions: jmarket
•••

I had an Intel 600P NVMe drive when they first came out.
after one of their major half-yearly Win10 releases not too long after WIn10 came out, there was a time when I had to stop using the 600P drive and change it for another brand as MS didn't support Intel SSD's drivers for while.

but you have reinstalled Win10 from scratch without the 660P present so your issue is elsewhere - but funny how it started when the Intel NVMe was first tried!!!
•••

I am hesitant to accuse the drive of causing this issue, but I don't know how my mobo could get fried from just installing an NVME drive. I have returned the Intel drive back to Amazon, and I am shopping around for a different NVME drive from a more well known brand of disk manufacturers currently in the black Friday sales.

I forgot to mention that I purchased my computer from an SI, so it is still under warranty. They are currently closed but will be contacting them Monday to request an RMA to replace the mobo and have them do a professional diagnostic.
Reactions: jmarket
•••

let us know how you get on.
Reactions: jmarket
•••

I am writing this post from my now repaired computer, detailed above.

After that I was able to do a clean Windows install and run a memory diagnostic. All clean.

I then reimaged it from my backup, and now I am not have any errors or problems. Except my data drive got formatted so I am redownloading about 3TB of games. lol.

I wonder if when I buy another NVME and try to install that one if the same thing will happen.

Thanks for all the well wishes.
•••

treading softly, softly, I'd wait for the new NVMe and there should be no reason it can't simply slot in and be used.
•••

This is the TPM part you will need to find. Maybe Amazon https://us.msi.com/Motherboard/TPM-20-Module
•••

Now that my PC is fixed and working fine, I have ordered 2 NVME drives to install. Wanted to splurge a little in the black Friday sales that were going on. Ended up ordering these two drives:

I was greeted with the notification that the disk needed to be initialized and formatted to use, but only for the Blue. Hmmm. Went ahead and did that, everything looked fine for that drive no issues. Restarted to my BIOS to see if it saw the Black.

The Black is not listed in the BIOS. So I spent 20 minutes digging in the setting of the BIOS to see if there was something I needed to change to flip the PCIe slot to Gen 4. Maybe there was a power management setting shutting off the PCIe Gen 4 slot? To Google I went.

The WD Black is backwards compatible with PCIe Gen 3, so it should still be showing. This further convinced me it was some setting in the BIOS that had disabled the PCIe Gen 4 slot, or some power management issue.

I was now convinced that the BIOS had a power setting keeping the PCIe Gen 4 slot turned off.

Called MSI at this point, and was digging through the documentation for the motherboard off their website. The MSI CSR told me that with the 10th Gen Intel processors that the entire PCIe Gen 4 slot is just disabled on the z590 motherboard that I have.

Oh well. Swapped the drives around again, and now I have the second NVME drive that I have wanted for the last two weeks currently being filled with my Steam library.

The Black is buttoned back up in the box to return to Amazon.

Moral of the story, do a little more research before shopping.
•••

Glad you are up and running. I had hell trying to buy the TPM 2.0 ($20) as they were all sold out. Try to find for your Windows 11 before you install 11. If you do it now, I think they are still giving you a free upgrade to 11 Pro. Might want to get it even if you do not want to use it yet. Just associate it with your MB for later (2025)
Click to expand...

Hey Hacker! If you have the same CPU and motherboard that I have, you don't actually need the TPM chip to slot into the motherboard. You can activate everything with the BIOS and firmware.

Here's a screenshot of the settings in the BIOS to enable TPM 2.0. If you mirror the settings like I have them then your TPM will get turned on and Windows 11 will be able to be installed. Maybe you can still return the TPM chip you bought and save the 20 bucks?

Hope this helps, and let me know if it works for you too. 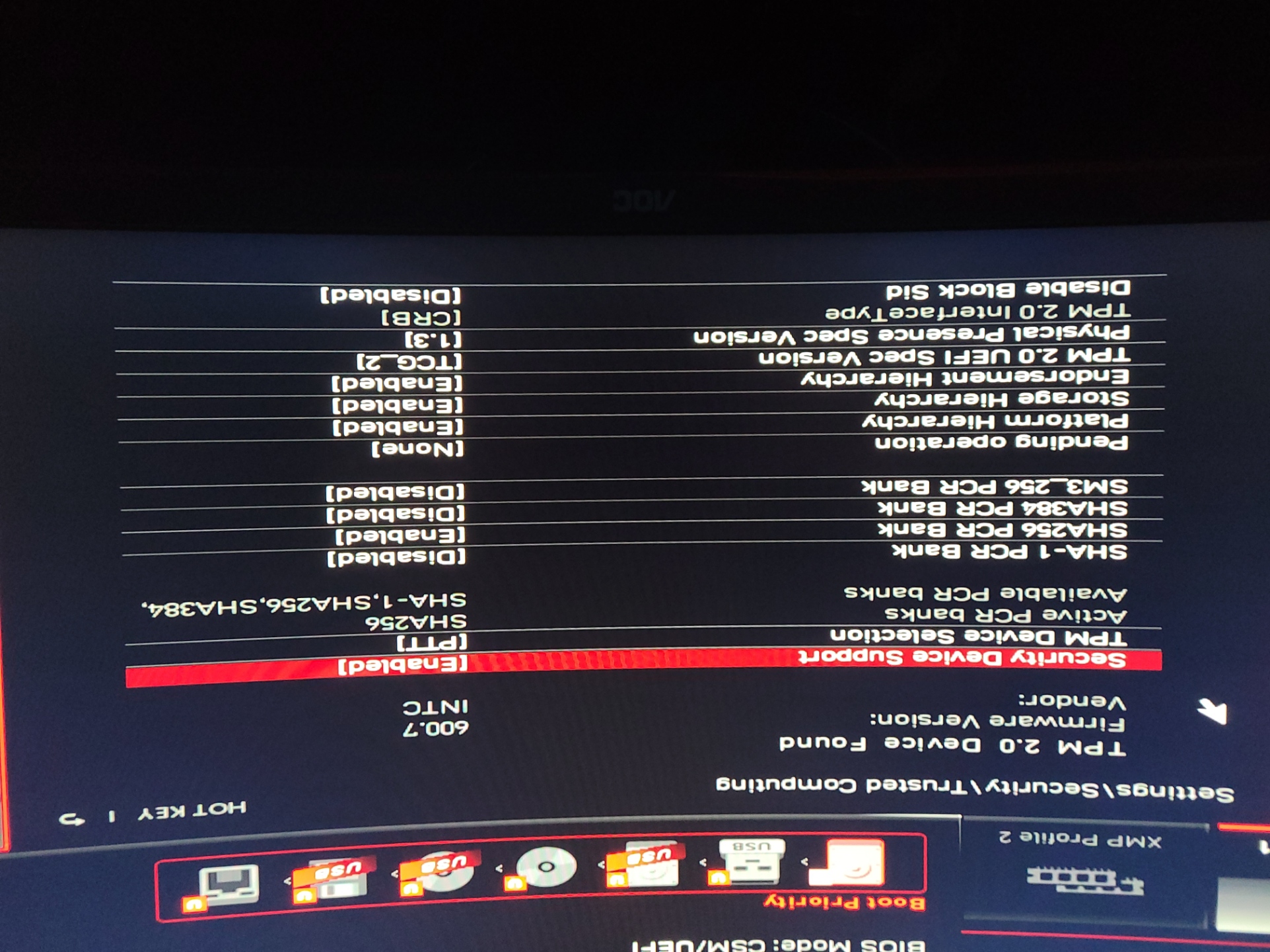 talex490 said:
Moral of the story, do a little more research before shopping.
Click to expand...


Called MSI at this point, and was digging through the documentation for the motherboard off their website. The MSI CSR told me that with the 10th Gen Intel processors that the entire PCIe Gen 4 slot is just disabled on the z590 motherboard that I have.

You see my confusion
•••

I have the first one Z490 without it in BIOS

Which chipset do you actually have then?
•••

thread was closed but that was lost in the recent forum crash.
•••