I've been gone from home for a week, and I came back to my computer not booting up.
After trying relatively everything to make it boot, nothing worked so my guess is that something happened like a power surge, which could have killed my power supply, it was a cheap one so it might be possible.

I thought it would be a good opportunity to upgrade my PC, so I changed the motherboard, the power supply and the cooling system. Here are my current specs :
However, after installing everything and booting the machine, I've realised that every now and then, around every 5 seconds, i get microfreezes/stuttering. Note that both video and audio are freezing. It is not a blackscreen, really just a freeze. It happens everytime, everywhere ; on my desktop, watching a video, in game...
It never happened before my PC not being able to boot.

So here's my questioning : Did I messed up while plugging anything? Might the power surge have affected the processor, causing this? Can this be related to the motherboard?

One thing that you do not mention having done is clean installing Windows and the system drivers, were both done and the first drivers to be installed the chipset drivers.

phillpower2 said:
One thing that you do not mention having done is clean installing Windows and the system drivers, were both done and the first drivers to be installed the chipset drivers.
Click to expand...

I just did a clean install of Windows, which didn't resolve the problem.
After installing Windows, I went to install the chipset drivers but the latest driver was already installed.
I did a repair of the driver with the intel tool but it didn't resolve it.

Am I supposed to uninstall any drivers and clean install them? How to do it?

ayz said:
After installing Windows, I went to install the chipset drivers but the latest driver was already installed.
Click to expand...

Once Windows has been clean installed you must then install first the MBs chipset drivers, then the storage/SATA drivers and third the graphics drivers, the drivers can either come from a disk provided by the motherboard manufacturer or downloaded from their site and saved to a flash drive etc, this is a must and Windows should not be allowed to check for updates before it has been done as more often than not Windows installs the wrong drivers or in the incorrect order and this can cause all sorts of problems.

Can I ask that you do not quote every reply as we have to read the full post to make sure nothing gets missed,, thanks.

Following your advices, here's what has been done :

Stuttering is still there.

Couple of problems both with your update and what we can see in Speccy.

That is not what was advised nor is it recommended.

Where did you save the drivers to.

Why are you using CCleaner.

Ok so I did it again, this time without touching at Windows Update.

Every drivers are downloaded on my desktop and installed under C:

I had installed CCleaner by error, thinking that it was Speccy, as the link above redirected to CCleaner. I didn't install it this time.

Still not showing any drivers having been installed for some reason

Try installing them drivers, once done run Speccy to see if they are shown to have been installed then get back to us.

In addition to the above,


ayz said:
I unactivated my videocard and booted my PC with only the Intel UHD Graphics, and those problem were still there, so i doubt it might be related to the graphic card.
Click to expand...

Can you tell us how you " unactivated " the video card.


ayz said:
After trying relatively everything to make it boot, nothing worked so my guess is that something happened like a power surge, which could have killed my power supply, it was a cheap one so it might be possible.
Click to expand...

Were you overclocking anything, if yes, what.

What is the brand and model name or number of this cheap PSU, the most important part of a PC and people go cheap when the PSU is the item that has the potential to cause the most damage when it begins to weaken or goes bang completely.

The behaviour that you describe is typical of hardware that has been poorly powered or/and a bad OC.

I installed those drivers in the said order : 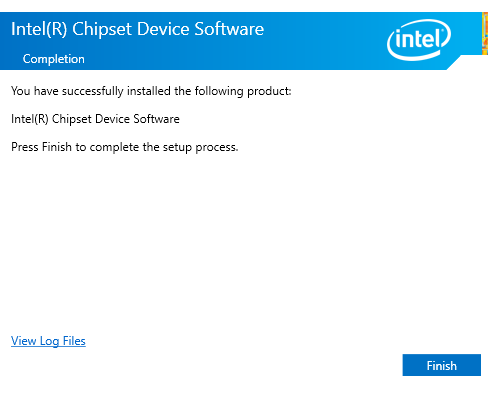 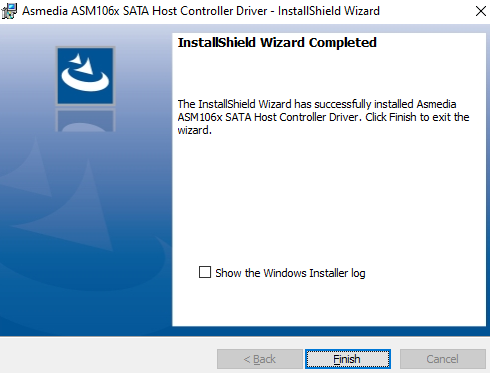 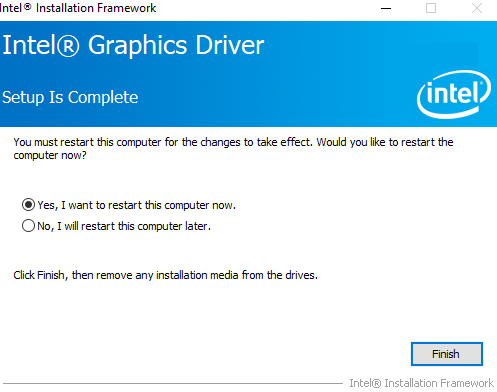 Speccy update : http://speccy.piriform.com/results/AJBUzDa7kZENU2qTdcvQjUA
Drivers are not seeming to appear.

The video card had been disabled through device manager -> right click -> disable device.

I came home after a week away, tried to boot my PC, nothing happened. Tried using other power cables, on different outlets to make sure it wasn't external to the PC. I then checked if everything was plugged well, checked if front panel connectors were on place. The little red LED that was on the pc which was supposed to indicate if there was power wasn't even on. Also, there wasn't any beeping indicator when trying to turn it on.

I wasn't there so I dont know what could've happened, all I know is that when I left, the PC was turned off, the PSU on/off button was on, and it was plugged to the wall. The PC had not been moved during my absence.

I never had overclocked anything, didn't even knew how to overclock.

The PC was a prebuildt from DELL, they used a dell d460em-00. I said it was cheap because I know prebuild makers tend to save money on those components, and because this is what i ended up with while taking off the PSU : 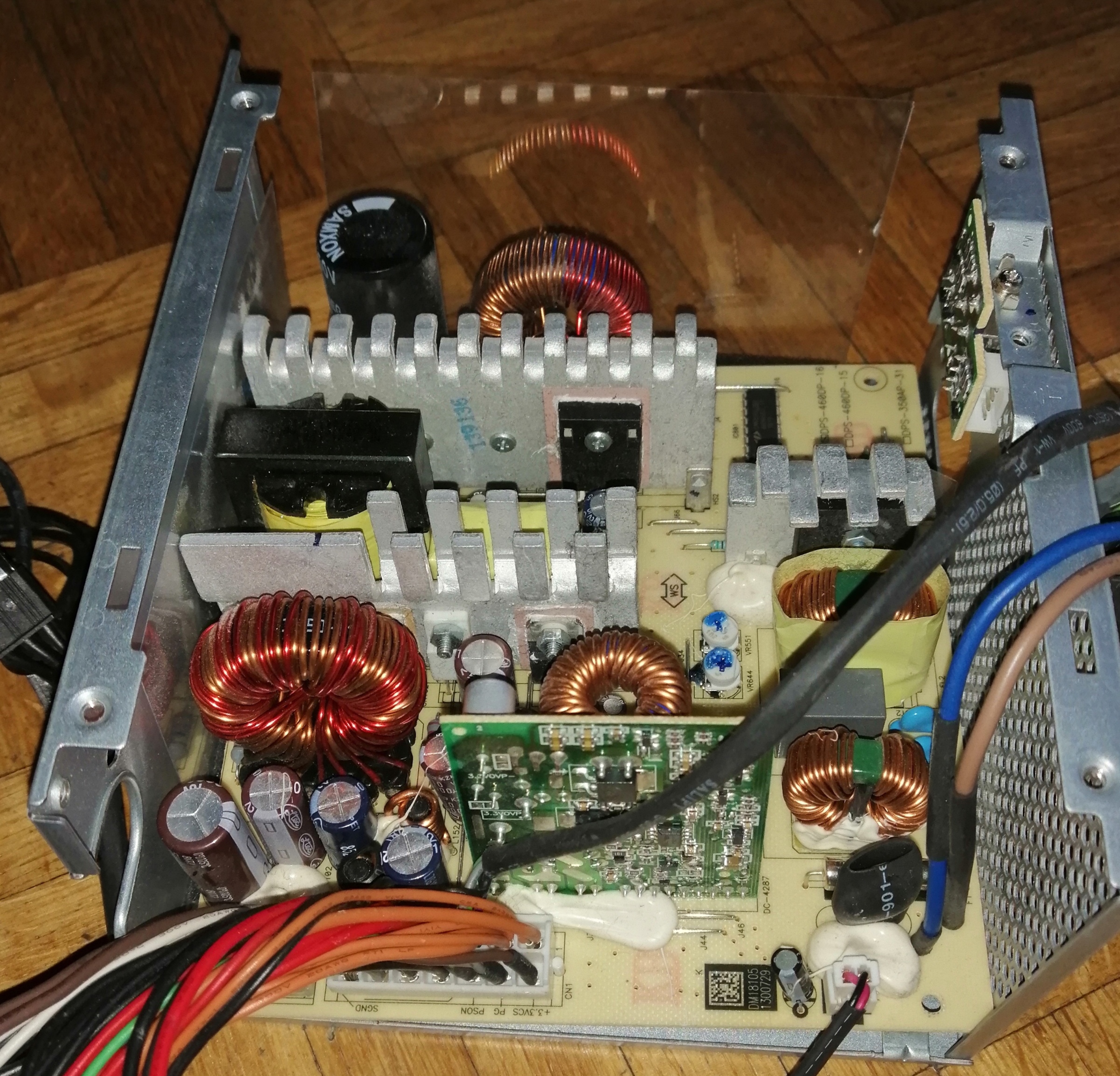 I'm pretty sure good PSU dont have to be opened just to unplug them from a motherboard...

Please tell me that you did not open up the PSU.

ayz said:
I'm pretty sure good PSU dont have to be opened just to unplug them from a motherboard...
Click to expand...

You don`t as even when unplugged from the mains a PSU can hold enough charge to kill a person, hence why you should not be opening one up.

That PSU could only produce 385W and even that is questionable, bottom line is, don`t be surprised if that junk PSU has damaged all the original hardware, a minimum of a 500W Gold efficiency rated should have been used for the GPU that you have.


ayz said:
The PC was a prebuildt from DELL
Click to expand...

You should have mentioned this in your OP as it could have saved you and me an awful lot of time.

Dell components are not the same as what you get off the shelves, they get modified to use less power, the BIOS on your original MB was written to recognise your CPU and the GPU was dumbed down so that a weaker PSU could be used, 450W to be exact.

Thank you for your information

Sorry for not letting you know earlier that it was a prebuildt, I didn't except it to have such consequences.

So if i understood, the dell GPU used isn't compatible with the new hardware, so I got to get a new "normal" GPU?

ayz said:
So if i understood, the dell GPU used isn't compatible with the new hardware, so I got to get a new "normal" GPU?
Click to expand...

As per the explanation in my reply #14;


phillpower2 said:
The Dell GPU problem is two fold, you cannot use Nvidea drivers for the card and likewise the Dell drivers for the GPU could cause your system to crash
Click to expand...

The above is a secondary problem for now being that the issue is still present when the onboard video is being used instead of the GPU.


ayz said:
I booted my PC with each RAM by itself and the problem was still there, so i doubt it might be related to the RAM.
Click to expand...

Was the GPU still in the MB when you tried each stick of RAM separately, if yes, remove the GPU from the PCI-E slot and repeat the same tests that you did with the RAM, if the issue still happens, try starting the computer in Safe Mode only (No Networking) while you are testing the RAM sticks one at a time when using the MBs video and the GPU still out of the PC altogether.

Thanks for your answer.

Yes, I had tried each RAM with the GPU in the MB.

I did try with the computer in Safe Mode, but without networking it is hard to see if the issue happened, as to see clearly if it happens I watch a video or start a game, so I cannot tell if the issue is still there in Safe Mode.

I also tried with Safe Mode + networking, where the issue was definitely still there.

Based on the testing and the hardware already replaced the CPU or outside chance the RAM is bad, the fact that the issue is present with both sticks of RAM but one is worse than the other means that it could still be the CPU, question is though, did you test both sticks - one at a time in the other slots, the slots as well as the RAM have to be ruled out.

RAM sticks were initially on slots 1-3
Tested on slots 2-4
Tested one at a time, on each slot.

Every time, the issue was still there.

Only three things left to check, a known good stick of RAM a generic CPU as opposed to the Dell one and a stock CPU cooler and fresh thermal compound, a heatsink applying uneven pressure atop of a CPU can cause all sorts of problems.
Reactions: ayz