Exclusive: Discord is getting threads – this is what it looks like

Update: We added a video of Discord threads – embedded below via YouTube – in action, and it looks slick.

Discord keeps evolving and growing, especially after its user base spiked during the pandemic, and the app is finally adding Threads – we just don't know when yet.

The Discord Threads update is still in its early testing phase, and is just being phased out to bot developers so that they can make sure their work is compatible whenever the feature does indeed launch.


According to the Discord Threads developer documentation, they're meant to be temporary sub-channels that should help people keep up with conversations in busy channels.

This is in contrast to replies, which was a feature added back in November 2020. While these do help a bit with keeping conversations going when 30 people are all talking about different things, it can still be hard to keep track of the conversation, and it seems like the Discord Threads feature is supposed to counter that.

We don't know when this feature will be going live, as right now it's limited to bot developers with servers under 5 users and 1 bot. We've reached out to Discord for comment on when this feature can be expected, and we'll update this story if we hear anything. 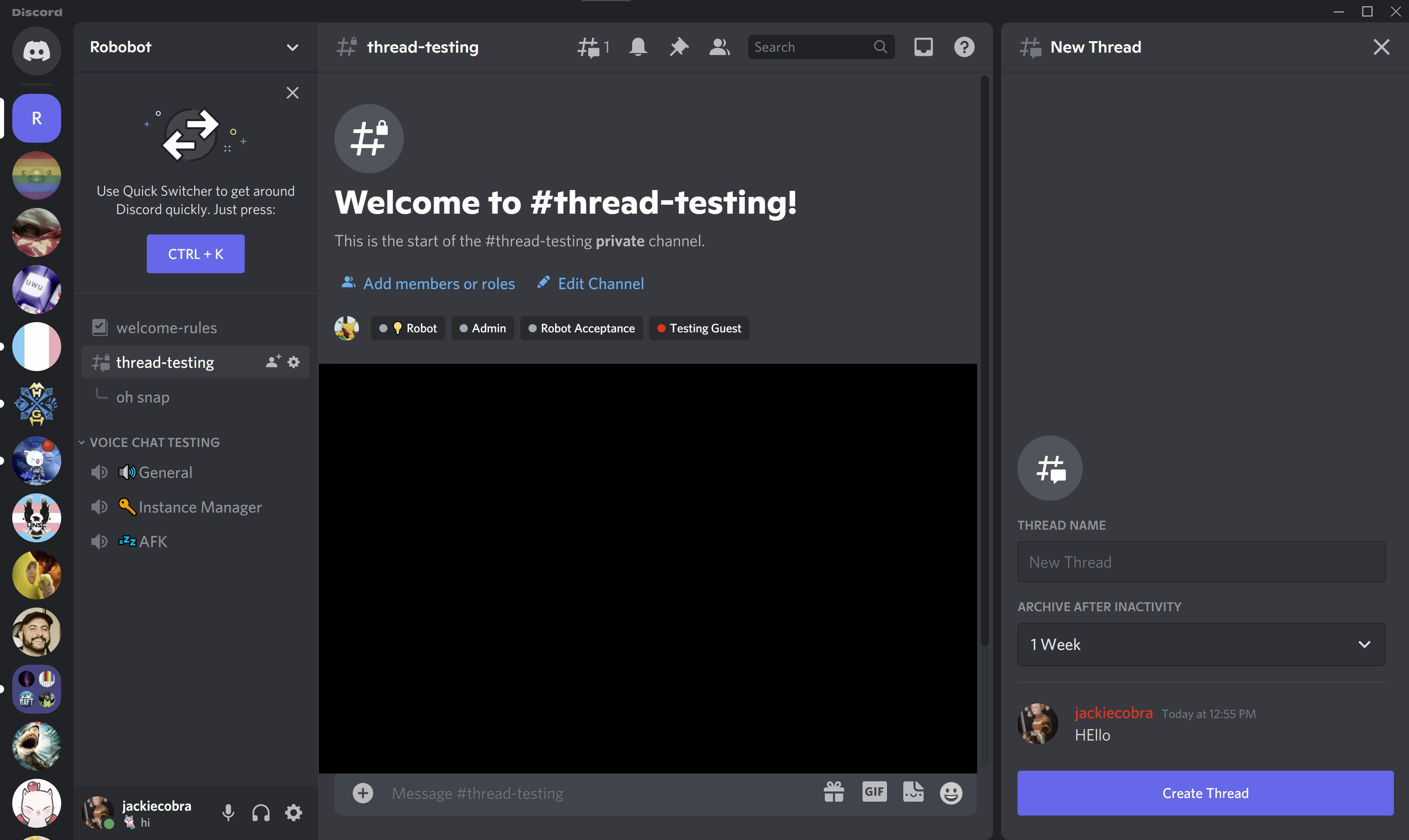 I got invited to a test server for this feature, and I played around with it for a little bit. The way it works right now – and again it's in an early testing phase – is that you can mouse over a message in a channel with Threads enabled, and there will be an icon that looks like a hashtag with a speech bubble on the lower right corner.

Click that, and you'll be taken to a New Thread window. There you can name the thread and choose how long it should be up before it's automatically archived. Right now the longest period of time you can choose is one week, which means conversations older than that will be archived. However, admins can undo this at their discretion.

I only tested this on desktop, so I can't say how it'll work on mobile right now, but it will open on the right side of your Discord window, so you can view the thread next to the main chat. Don't worry if you accidentally close it, though. Beneath the main channel where the Thread was started, you'll see a directory of Threads, which you can easily navigate to the conversation you were looking for.

Discord released a quick video for developers that gives a good idea of what this looks like in practice. And, hey, hanging out in the park does sound fun.

Why does it matter?​

If you're part of an active Discord community, you've probably noticed that sometimes things can get a bit... out of control. I know that when I'm just trying to talk with friends in my Final Fantasy XIV community, especially when, say, there's a new expansion being announced, there can be hundreds of messages going off about various different subjects. Threads should fix this.

Especially if you're trying to organize an event, or, say, a raid in Final Fantasy XIV, and you have a bunch of people having irrelevant conversations, it can be easy to lose details in the chaos.

There are also conversations you may want to revisit from time to time. One of the things I like to do is talk about like a new movie or TV show, and come back to it when I have new thoughts or whatever. With threads, that conversation is pinned under the channel, so it's easy to go back to it even after hundreds of other messages have filled the main Discord channel.