I built my PC in early January:

Basically, my PC seems to 'freeze' while playing games such as COD War Zone with no real indicator of when it is going to happen, I don't lag on high settings either, it happens in other 'demanding' games, and even happened once when using Photoshop. The display halts on a still image of what I was previously doing, I cannot move my mouse, alt f4, change tabs etc... Completely unresponsive, HOWEVER, I was recently in a voice call with a friend when I froze, and while I couldn't do any inputs, I could still hear and talk to my friend. sometimes I am able to move the mouse for a few seconds when it freezes.) Every time a freeze happens, I need to manually turn off the PC with the power button. I am still able to use this computer for every day uses like youtube and less demanding games without problem.

I have checked temperatures of CPU and GPU while playing, they seem fine
I have uninstalled and reinstalled drivers
I have checked task manager and had it on screen during a freeze, everything was normal, although I don't remember the exact % levels, memory was at around 70%
A forum I read suggested using FurMark, which I did and no issues stood out to me
I ran the memory diagnostic, no problems were found
I ran system file checker, no problems found

Any help would be hugely appreciated, if there's any info I missed let me know, thanks.

If all possible if you could run these 2 while running these demanding games and prior to the BSOD..

Thank you for the reply

I downloaded Speccy, and immediately saw that the CPU at 80-95 degrees Celsius with nothing open other than Google and Steam... I don't think this is normal so this might be my problem. What could be causing this high temperature? Is the fan too weak?

I am using the fan that came with the CPU, with 2 other fans in the PC tower

While not playing anything: 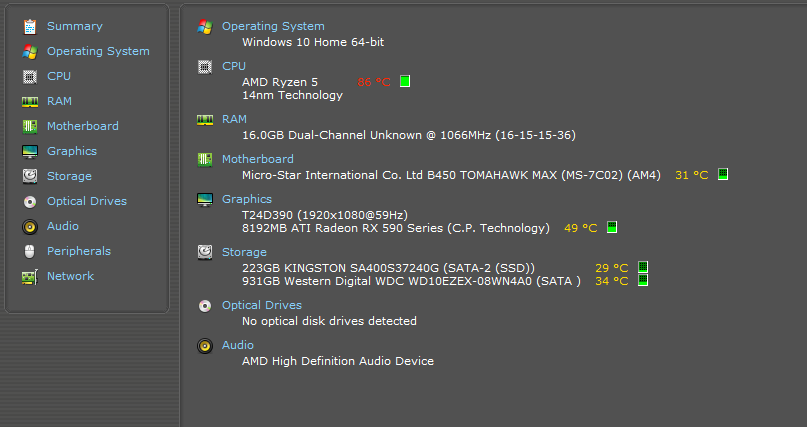 The temperature jumped up to 100-110 when loading up COD Warzone, I even saw it hit 114 at one point
The PC 'froze' shortly after. 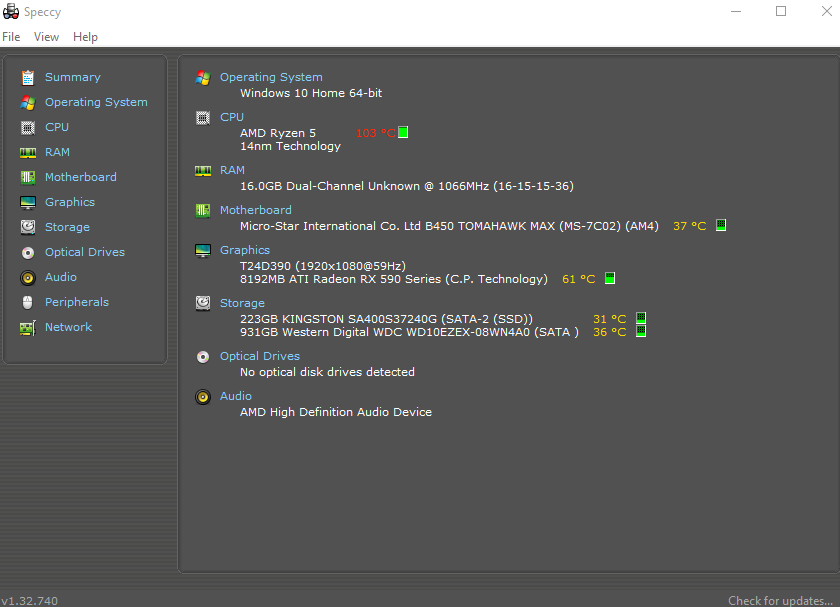 I suppose I need to turn up the CPU fan speed? I have only changed the GPU fan speeds, never touched the CPU fan.
I downloaded Speedfan and here are the results while not playing anything 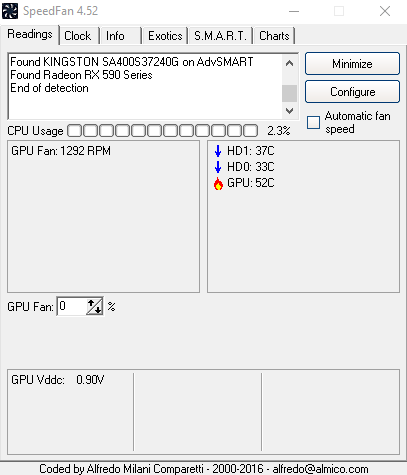 Not quite sure what to do next, guidance would be appreciated, and I'm happy to give more info if needed, thank you

You need better air flow for sure... Turn up the rpm's on the fans and see if that helps. If it does re-run Speccy and Speed fan and post ..
M

I was suspicious of the Speccy reading, so I went into bios and checked cpu temperature which showed 37 Celsius, and 98 farenheit. The guys here have a similar problem with Speccy: https://community.ccleaner.com/topic/40990-incorrect-cpu-temp-reading/

So I'm sure Speccy is giving a false reading on the CPU temperature, reading celsius instead of farenheit.
I felt the cpu fan heatsink and it was room temperature, nowhere near the 100 degrees celsius which speccy told me. 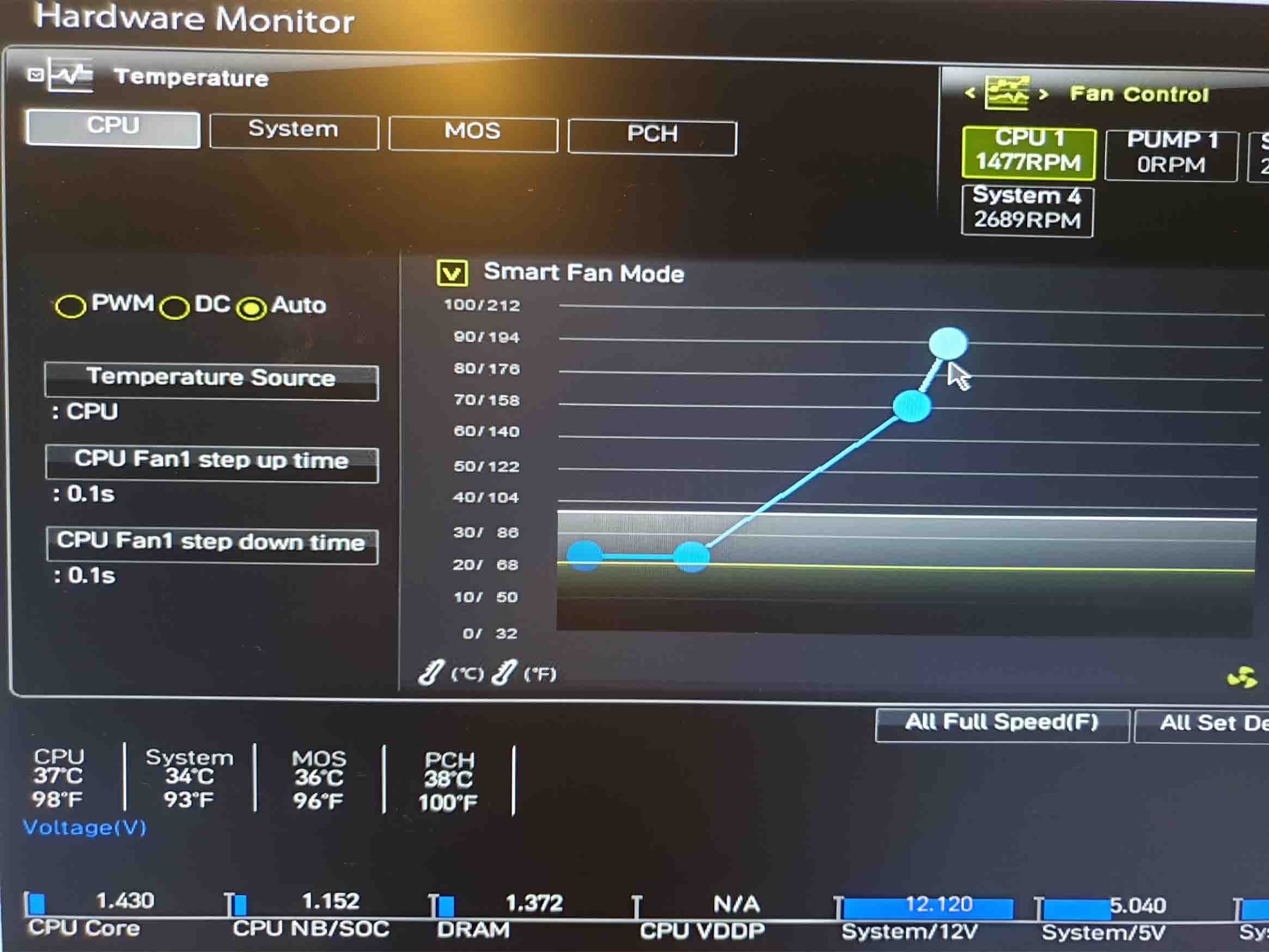 I hope I am right here? What else could the problem be? I should say that when I am using Photoshop, task manager memory % becomes rather high, this could be normal or perhaps this could be a memory issue?

Yeah Speccy has a bug,with it's temp reporting. That was the reason to run speed fan for comparison.. The bio's reading would be the one to stick with at the moment.. When you checked the bio's for your temps,at what stage of usage on your pc did you check that?

I opened bios by restarting the PC and pressing the 'Delete' key, so the readings are from right after restarting

heres what I got from sysnative:

Ok, I found the problem, it turns out I was overlooking the GPU temperatures this whole time while playing games, it was hitting 75c which is the recommended max temp, so I changed the fan settings from automatic to manual and have had no problems so far.

Thanks for the help @vger

You can call me Ad