I recently spent an obscene amount of money to build my pc. Performance is about what I expected but some games cause my computer to black screen and reboot. Games like cod: cold war and warzone have no issues, along with benchmarks and stress tests like port royal, time spy, etc. However, some games, namely FFXIV, valheim, and outriders, cause these random crashes with no set pattern or timing. Lowering the settings to minimum in any of these games alleviates the crashing, but that's a workaround not a solution.
It's a full custom loop with the gpu and cpu under water. Both of them aren't running any OC's and I've tried everything from stock ram to aggressive OCing. I thought it was a driver or software issue and have spent hours going through and updating what I can, to no avail. I gave up and reinstalled windows via the recovery menu and still have these intermittent crashes. I've tried more aggressive ram cooling, reinstalling graphics drivers, sfc/dism commands, memory/ssd checks, driverfix (shows everything updated), and reseating everything from ram to gpu to power cables, with no results. One side note is my psu produces some easily audible coil whine under moderate power draw. I thought it might be too weak of a psu, but warzone produces the highest power draw in terms of gpu+cpu wattage and is one of my stable titles.

Thanks for your time and any help in advance

Surprised to hear that about the PSU, unless defective it is more than enough to handle your build.

Your RAM is being OCd past what the CPU is comfortable with, go into the BIOS and manually set the RAM to run at the speed appropriate to the CPU which Intel state here is 2933MHz.

Please note that chipset drivers for new MBs must be installed from either the installation disk that shipped with the MB or direct from the MBs download centre, if you do not do this Windows update may download and install the wrong drivers and cause you no end of trouble.

When I reinstalled windows I guess I missed the chipset drivers. I reinstalled that one along with a few others I suspect may have issues and set the ram to 2933 and it was stable running around in my problem titles.

So now my question is how do people oc their ram to 4k+MHz with the same processor/ram kits as me? Do I need to oc the cpu in order to handle an xmp profile? From researching a bit the only upside I see to doing this in the first place is alleviating frametime spikes and such, given that my gpu is the bottleneck 99% of the time. So if I'm not experiencing that kind of stuttering it's not really worth it?

It appears I spoke too soon, after more play time I still experience the same crashes. Even dropped the ram to stock frequency. Another one of these if curious.

Strange, other than Nvidea drivers we are not seeing any drivers having been installed in your latest Speccy report.

It would help if you told us what exactly happened and what the computer was being used for when the latest problem/s occurred.


If not already aware, there is a difference between overheating, hardware failure and software crashing, see the below;

Software such as Windows can crash and when it does crash you get a BSOD and when enabled a crash dmp is generated, third party programs may on occasion close to the Windows desktop.

Hardware failure such as a weak power supply and/or overheating are not software related and when a computer freezes, restarts, suddenly turns off or the screen suddenly goes black or jumbled the behaviour should be described as the "computer shut down unexpectedly" etc and not as having crashed as the latter implies a software issue as opposed to an obvious hardware issue when described properly.

Having the correct info means that helpers will not be looking for a software issue when the problem is clearly hardware related.

So whenever I play either outriders, valheim, or ffxiv, after an indiscriminate amount of time -sometimes a few hours, sometimes five minutes in- my computer will instantly crash, my monitors go black and I can see the ez-debug LED for the cpu turn on while all the other lights and fans shut off. After a second the computer whirrs back to life with the debug leds cycling through like they normally do, does the bios splash screen then goes to a black windows loading screen where i watch the spinning dots for longer than a bootup normally does.

Event viewer reports "The system has rebooted without cleanly shutting down first. This error could be caused if the system stopped responding, crashed, or lost power unexpectedly." I don't notice any dmps being generated.

To me this sounds like an overheating issue, however today I ran furmark to test the gpu, and different flavors of prime95 to hopefully stress the cpu and ram intensively. All of which ran fine. Even ran both concurrently to make the cpu+gpu pull 650W combined according to hwmonitor, still no crash.

Sorry but was only asking what the computer was being used for at the time of the latest issue, knowing this will help us to see if any pattern emerges while we are troubleshooting.

You are correct in that the behaviour is typical of something overheating.

No rush on the following as I may not be around until tomorrow;


Download MiniToolBox and save the file to the Desktop.


Close the browser and run the tool, check the following options;

Oh whoops. The crashes occur whenever I'm running around in one of those three titles, including the latest one. Not while I'm standing still or messing with a menu/inventory, but moving across the map. As far as background apps, I still crash even when I close third party apps from the taskbar and system tray.

Latest attempts were disabling razer synapse and its services, enabling/disabling resizable BAR in bios, flashing bios to latest version again, fullscreen/borderless/windowed, and installing games on either of my ssds. Something peculiar I noticed as well, playing outriders in single player seems to prevent crashing, whereas having one additional party member introduces the crashes. Could be a title specific issue, however all these games are perfectly stable on my old pc.


Carson_C said:
Could be a title specific issue, however all these games are perfectly stable on my old pc.
Click to expand...

Is your other computer using a wireless or Ethernet connection for online gaming.

Yea I didn't realize it's bugging out and not letting me attach the .txt. And currently wifi, the mobo integrated intel ax201. My goal is to run ethernet cables but so many house projects right now.

Sorry but still no log and I asked if the second computer was connected by wireless or Ethernet, not the one that we are presently troubleshooting

Games consoles being dedicated to gaming are specifically made for gaming via a wireless connection but PC gaming via WiFi sucks and is especially bad when multiplayer is involved, Epic and Warzone have to be the two worst in recent times.

Here's the contents copied to a google doc lol. 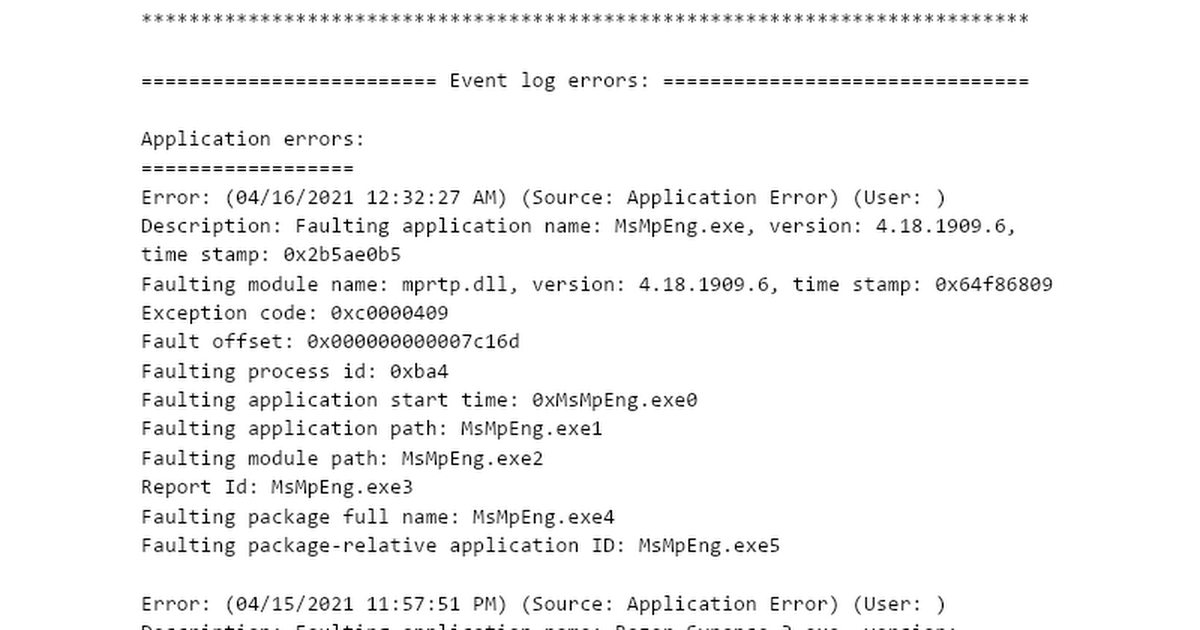 And sorry I just woke up I can't read yet, old one has a pcie tp-link wifi adapter. No onboard wifi.

MTB log doesn't show an errors from today but your latest issues dated yesterday were caused by Razer software and Windows 10 which is possibly corrupt.

Have you had any third party AV protection on this computer since Windows 10 was last clean installed.

Have you reinstalled the drivers for this device yet.

Wireless card info acknowledged, if push comes to shove you could try swapping in the PCI-E card just for testing purposes.

Yea I didn't even think of putting it in until you asked about it. Yea I downloaded the drivers from intel's site as well. No AV, I've never run one other than windows defender on both of my pcs.

Any problems at all since you installed the correct drivers and restarted, if not, would leave as is for now and see how things go, any problem/s we can either test your hardware or you can try swapping in the wireless card first, entirely your choice but do be sure to uninstall the Intel wireless drivers before you fit the add on wireless device.

Updating the driver appeared to work at first then it started crashing after a few hours. I finally got around to slotting in the old pcie wifi adapter and the problem seems to be gone for now. I guess this is a temporary fix until I can setup a wired connection.


Carson_C said:
I downloaded the drivers from intel's site
Click to expand...

The drivers should have been downloaded from MSI here and not direct from Intel, the drivers may well be custom written for your specific MB.

Interesting, I downloaded all the mobo drivers from here, which doesn't even have some the drivers. I tried Installing these instead and I still experience the same crashes. Also experiencing them while using the old wifi adapter as well, I just got a lucky stretch I suppose.