Solved Computer turns on but does not boot.

Hello. Well, I'm finally asking it here since neither discord nor reddit worked, I figured I could go straight to the point here.
I bought a second hand PC. It worked flawlessly and ran everything I had installed on ultra for four days, after putting it in sleep mode for two hours, it accidentally got turned off, and since then it does not want to boot up.
Specs:

The PC seemed to have never been used for heavy gaming use. I bought it off of a guy which did not know much about computers and was willing to sell it for a rather low price.
I bring it home and plug it all in and voilà, everything powers on and starts up, the fans stop for a second, which scares me but promptly turn back on and everything boots up, the fan thing goes on every time it turned on. The PC didn't have an activated Win10 version- It's all fine, I have one if I feel the need to replace the hard drive. I didn't feel like tempering with it yet.

I benchmark some games, which, ran fantastically, no slowdowns, no lag, no stuttering. I think this is an amazing for such an old piece of hardware to do, especially since I've always gamed on very low end PCs (Which, I am using again right now, the irony, am I right?)
It goes on for four days, nothing alarmed me. I go take a two hour nap whilst it was in sleep mode. I try to turn it back on. It.. Does? Kind of. Except I hear no beep, and my screen shows "no signal" and my power button does not light up. However, my fans still ran and I'm pretty sure that everything else worked fine, since I even heard the disk drives run. The keyboard and mouse lights DID turn on though!

Here's the following things I did to attempt to troubleshoot it:

- Remove each and everything plugged into the USB slots and whatnot.
- Reinitiate CMOS by removing the battery and put the CMOS switch to the other side- This time the computer wouldn't turn on. Weird.
We put a brand new CMOS battery in, got the switch back on, obviously.
- Switch, remove, add the RAM. Powers on, doesn't boot, still.
- Remove Graphics card, still no boot.
- Remove, replace the disk drives, still no booting up.
- Plug, unplug, switch pins on the motherboard, same story.
- Grabbing a PSU cable from my previous PC. (Which obviously works fine normally) - Still no boot, beep, or changes.

What's weird is that I don't even think it is a motherboard issue, everything seems to communicate with it, even my keyboard & mouse lights.

What could have caused this? I decided to bring it to a repair shop for a diagnosis, which, they told me that they'd let me pick it up by Wednesday and tell me what's wrong with it. I'm almost sure they'll try to sell me something and telling me that a lot of things don't work or that they should be replaced because they're "too old". Problem is that I cannot "Just buy another PC".

Too late for us to do anything now but no harm in us taking a look at possible causes.

Can you post the brand and model name or number for the motherboard and the PSU.
M

Hello, well, this is the last day until I finally get the diagnostic, here's two pictures, I'm really not sure of the brand of the motherboard unfortunately nor the PSU, but I've heard someone say they've never really heard of that PSU name, I htink it's mainly because I live in France, thus, possible that it was made under a French brand. 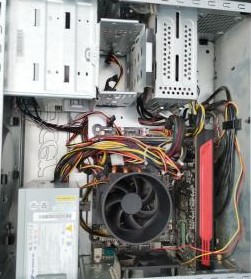 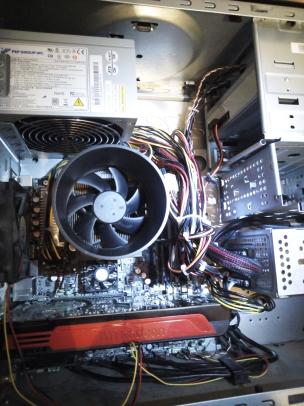 Here are two different pictures.
I really hope it's not the motherboard, the computer worked too well without any issues whatsoever for the time it did.
I'm thinking it miiight be RAM, I hope, deep down that it's not a motherboard issue. Maybe I've tinkered with things I don't know fully and that's why it still doesn't POST. Windows 10 wasn't an official version and was unactivated, changed it to an official version, still not activated but I have that on another hard drive.
Maybe my boot hard drive failed or corrupted, I don't know. The motherboard seems absolutely fine to me.

The weirdest thing is that the only component that does not seem to function/light up is only the power button, there's the "disk usage" light that comes on, but not the power button at the front of the computer, I couldn't see any other light, not on the motherboard, nowhere else.
When I plug in my keyboard and mouse it lit up, and seemed to respond, too. Disks made some noises and all the fans spun correctly. The thing, is that the PC itself did everything as it did when it worked (same sound patterns), for the exception that it just refused to POST and that it just did not produce any beeping sound.
M

Ah! One thing I forgot to add!

When I hold down the power button, it shuts down as it should.
Could that mean that some sort of process in shutting down the PC is happening within the motherboard? Unless it's done by a completely other component, perhaps it'd be a good sign that at least, something communicates with it, still?

I'm probably trying to comfort myself at this point, sorry.

I'm still interested to know if someone could determine the probably cause. Not that I don't trust the technicians at the computer shop, but unfortunately error is only human, and they can perhaps misjudge the cause of the PC not POSTing.
I'd happily read on whoever can provide advice!

Unfortunately without the MB details in particular we are unable to help as we have no way of being able to check the specs, example, you mentioned removing the GPU and USB components, well if the board has no integrated video a MB will not boot and likewise you must have a keyboard connected to a computer for it to boot else the power on self test (POST) will fail.
M

Yes, sorry I couldn't get these details earlier , I however WILL post them if I can find them when I get the computer back and the diagnostic is given. I still have hope. And especially since you mentionned this:

"if the board has no integrated video a MB will not boot and likewise you must have a keyboard connected to a computer for it to boot else the power on self test (POST) will fail. "

Couple of questions for you;

Were you getting any message on the monitor at all something like "No Signal" for example.

Did the computer ever beep when it was working, not all systems ship with an onboard speaker so if the computer never did give out a single beep once it had booted up there may not be any speaker which would explain the lack of any beeps when you were testing.
M

I indeed got something that said "No signal"

The problem is that it did beep before. I'm not sure why it doesn't anymore.

You getting the "No Signal" message means that the screen is ok and that the problem is with either the source of the video (your add on GPU) or the cable that carries the video signal.

Odd that it did not give out any error beeps if it normally gives out one beep after passing the POST, only the GPU itself gets tested during the POST so not getting any beep could mean that the video cable is bad, we can suggest a couple of checks but it is pointless while you are not in possession of the computer.

Hold off replying for now but do get back to us with an update once you have the computer and techs diagnosis back.
M

Hello again, back with some news.

The technician informed me that I can rule out the motherboard as the issue as he didn't notice anything wrong with it and I'm not sure what exactly he did with it, but he told me that the HDD drives that were installed were dead.
I went to get an old HDD drive which worked, but same thing happened. We are currently getting Linux on an USB stick see if it works. Like I mentioned before the keyboard and mouse still light up. Took a few pics of numbers on the board but not sure if it's that.
I might post a video as well, the problem is that when it powers on, sometimes the fans slow down and speed back up, but when I power it up again the fans don't slow down and up, they just spin. I don't know why.
It does produce sound but it doesn't seem to come from the motherboard, simply the disk or HDD.

We also found out right now that the previous owners were using removable hard disks to boot. We are checking the manual as well.
M

In case I should replace the motherboard I have a spare MSI n1996 in an old Dell computer. Not sure if it's compatible with anything, though. The Dell's power unit says it supports AMD and Intel motherboards, too.

However I'm not going to try any of that yet, but things do seem hopeless.
M

Sorry administration.
You may close this thread, the PC is officially dead and there is no saving it. Blew up and now my home smells like a electronic waste that burnt.

Huge thank you, however.

Sorry to hear the bad news in your reply #13