10 things you never thought your PC could do 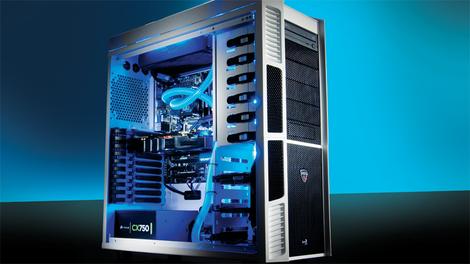 When you ask someone why they've just bought a brand spanking new PC the answer is almost always the same thing: to play games, surf the internet and create a few documents. A lot of people fail to unlock the undoubted potential that premium PCs have, which goes way beyond anything they'd thought of prior to buying the machine.

There's so much more to premium PCs than just a bit of casual gaming and writing out a few pieces of work you failed to get done at the office. These days premium PCs can be the legitimate centrepiece of the home thanks to the impressive screens on offer, and they can be set up to control all manner of different tasks at scheduled intervals. If you really want to you can run your PC as a Linux or even a Mac by performing a couple of nifty tweaks and making sure the hardware compatible.

In this article, we've compiled a list of 10 of the best things your premium PC can do that you never thought was possible.

Mac owners have enjoyed being able to boot up versions of Windows and Linux via Bootcamp for years, thus letting them access software (mainly games) which was previously only available to owners of PCs. What there isn't such an avid market for is PC owners who want to turn their PCs into Macs or partake in a bit of Hackintosh'ing. It's not the easiest task in the world but it is possible.

Creating a PC that runs OS X Yosemite can be a convoluted task given that only a specific list of components are capable of running the Apple OS, and as such it makes you question whether it's the best idea.

Although once you've bought the gear and have got it going with either a partitioned hard drive or separate drives, you'll have friends envious of a machine that can run, on demand, Windows 10, OS X and possibly even Linux.

Schedule just about every task

Premium PCs are complex creatures. Misunderstood by some and cherished by others, most people don't properly scratch beneath the surface of their PC and use some of the quirky features of the Windows OS. One such feature is the ability to use the Task Scheduler to automatically perform just about any task on your PC that usually takes up valuable gaming or productivity time.

You can find the Task Scheduler by opening up the Start menu and then typing it into the search bar before pressing enter. It will then appear with a list of the tasks that are currently scheduled, and it's the 'Create Task' option that allows you to lay down your own custom tasks.

Once the task has a name you can change the 'Triggers' tab that lets you decide when it will run, 'Actions' is where you set what the task does, and 'Conditions' allows you to set exceptions for each task. Set some tasks up and never worry about wasting time ever again.

Act as a TV

Netflix's popularity and services such as Sky Go have meant that most premium PC owners don't bother using their machine's ability to act as a fully-fledged TV when in fact it is one of the most useful things your new rig can do.

By purchasing a TV tuner card when initially shelling out for your new PC it can become a legitimate replacement for your TV. Combine it with a program like Kodi and download a PVR add-on to never worry about that expensive Sky subscription ever again.

Even if you don't want to buy a TV tuner card you can easily stream live TV using Sky Go, Virgin TV Anywhere, TV Catchup, or by simply navigating to the BBC, ITV, Channel 4 or 5 websites and viewing it there.

It's not strictly a function that your PC can perform, but if you have a tower PC and hate the sight of those empty ports at the front, your next great purchase will be small drawers to replace those under-utilised areas.

The sizes of the drawers obviously depends on the individual machine's case and most will only be able to store a few small items such as a stapler, some paper clips or other assorted office-related bits and pieces.

Obviously as soon as you decide to upgrade your premium PC with a few new components, the drawers may become defunct, but as a space saving idea they are an ingenious way to use your PC in a completely different manner.

Okay, so it might be a little over the top to call a premium PC a mass production factory of Victorian standards. The advent of 3D printing, however, does give a PC the chance to create just about anything you could possibly imagine. We've seen laptops, guns and a lot more created by 3D printers, and connecting one up to a premium PC gives you more chance to start up a small-scale 'factory' in your own home.

The price of 3D printers might be slightly out of the reach of the everyday premium PC owner right now, but with more and more coming onto the market that can do the deed for a lesser outlay, these devices will soon become a very real prospect for a lot more people.

Just think: this time next year you could print out a Raspberry Pi laptop to accompany the premium PC next to it.

PlayStation 4 and Xbox One consoles demand a major fee, and as such players rarely stray away from their trusty gaming boxes, but by purchasing a premium PC they could have had a wider choice of games than either console will ever get.

Even so, quantity doesn't always mean quality, so it's just as well that the current wave of 4K monitors combined with increased graphical punch makes PC gaming better than it has ever been.

Combining your gaming experience with the vast catalogue offered up by Steam is one thing, but you can also take advantage of the in-game streaming offered by the program that means you can beam it to another laptop and play in a different room. This is something only available to certain console users with Sony Xperia smartphones, and thus it makes PC gaming that bit more appealing.

Print media is famously on its way out, but premium PCs give anyone feeling nostalgic the chance to carry on their fascination with what is a dying art. All you need is a good publishing program such as Adobe InDesign or Quark Xpress and you will be able to sort out your own publication in no time. Just so long as you have a printer good enough, that is.

Of course eBooks have become incredibly popular since the advent of the Amazon's Kindle and creating your own is another way to get your name published beyond a personal blog, and is a far cheaper way to create a fanzine or publication. Indeed, you could create both and reach even more customers than you would otherwise, but choosing either is an ingenious way to use a premium PC.

The Internet of Things is here to stay and at some point in the not so distant future everyone's home will have some kind of automation in place to make living a lot easier than before. Whether this is to simply control the heating using a smart thermostat, or as complex as having a system of electronic locks monitoring all access to the home, controlling the smart home from your PC is easy.

One of the best ways to use it at the centre of a smart home would be to view CCTV of your house and then use this to control access to the smart locks present around the home. You could even set it to use sensors that detect when people are inside certain rooms, and connect this to the smart thermostat to turn the heating on as and when needed.

Become the king of multi-tasking

Windows 10 will make it easier than ever to put your content onto different virtual displays and multi-task like never before. Just think for a moment about your perfect computing setup and your premium PC may very soon be able to pull it off.

Working from home will be revolutionised as you can put Football Manager on one display to manage a game "every so often". Put the article you're working away at on another screen. Stick the BBC News channel on another display and you've created a monster. A good one at that!

Bitcoin, the crypto-currency, hit the headlines over the past couple of years after its value skyrocketed, and even though the price of a single Bitcoin has since dropped slightly it could still earn you a pretty penny if you have the extra GPU headroom to mine some coins.

Basically all you need to do is get a Bitcoin wallet, join a pool to make it worth your while, and then get hold of a miner that can utilise spare GPU cycles and make you some extra cash. Just remember that mining the coins themselves should never cost more than the price of the electricity you use. Of course, if that's the case you need to change what you're doing or abandon the idea altogether.